Auguste Desprez was born in 1791; there is no accurate information on where he was born but it was probably the city of Amance in the Haute-Saône district of eastern France.He was head supervisor in his regional tax administration - inspecteur des contributions directes - an occupation that left him much of free time to paint. He died when he was 50 years old.
His father, François Joseph, was an army Officer serving in the Savoy Carignan regiment and his mother maid’s name was Catherine de Lalle. In 1779, his parents had bought the feudal rights to estates at Gésincourt near Amance and added the designation "de Gésincourt" to their name. During the French Revolution, however, the family dropped the designation to avoid persecution that the nobility was liable to at that time and only began to use it again from 1861 onwards.

If we adopt Pierre Miquel’s categorisation, Auguste Desprez should be classified as a "réformateur". This group of artists who were born between 1775 and 1796 achieved a transition between neoclassicism - as represented by Pierre Henri de Valenciennes and his imagined landscapes, ideally Italianate and idyllic - and the coming romanticism. One of the primary characteristics of the "réformateur" artists was that they used to draw and paint in the open air, "sur le motif ".This was particularly true of painters working in the provinces of Dauphiné and Savoy in eastern France, especially in its mountainous areas. Desprez’s landscapes clearly compare to works of neo-classicists J.V.Bertin, A.E.Michallon or J.X. Bidauld while the style of his conversation pieces manner exemplifies the realistic trend associated with romanticism. Interest in painting animals prefigures a style that would not be fully developed untill the 1840s. Desprez’s drawing touch is meticulous, almost photographical, and his use of perspective masterly. His depiction of miniature figures - as well as small objects, animals and buildings - testifies to his skill as a representative artist, as do the thousands of pencil sketches that he made in the open in France, Germany and Switzerland. In many respects, Auguste Desprez can be said to stand among the forerunners of the major painting styles which would come to prevail in France later in the middle of the 19th century. 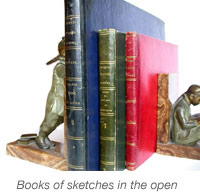 Auguste Desprez exhibited at the Louvre’s SALON in Paris in 1834, 1835 and 1836; we do not know if he did sold any works or took any commissions during these exhibitions.
Emille Bellier de la Chavignerie et Louis Auvray have included titles and descriptions of the works Desprez exhibited in the SALON in their dictionary of artists of the French School :

Signatures: four versions of Desprez’s signature have been identified to date but few of his works are signed :